Nothing says summer like a giant bag of fresh oranges from a friend’s tree. I got four bags from my friend at this month’s San Diego Food Swap — as well as finishing salts, marinara sauce, meat sauce, BBQ sauce and homemade cookies. If you are local I would totally recommend coming, and if you are in another town you should definitely find a local swap or start one yourself (like I did). 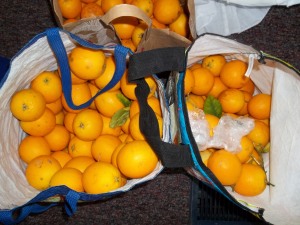 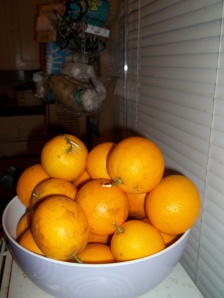 There are a few ways to use these oranges  — given my past experiements with marmalade, I wanted something decidely sweet. I mentioned in an earlier post that Linda Ziedrich’s awesome jelly book has a recipe for orange jelly, with a twist — you have to use pectin from another recipe in the book. Essentially, you juice the oranges, save the juice, then scrape the membrane and pith out of the oranges to make into pectin. 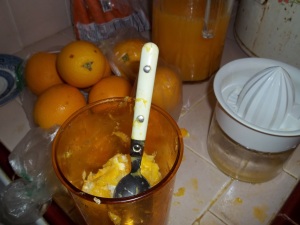 I was mesmerized. A way to make delicious jams and jellies, without tons of sugar? Using the same oranges for the jelly as for the pectin? Awesome. I had no idea how much work it was for so little. After putting serious elbow grease into juicing TONS of oranges (I see now why it is recommended to use big, juicy Valencia oranges instead of tiny, tart Southern California ones), I had barely two cups of pith and a nice pitcher of fresh juice. 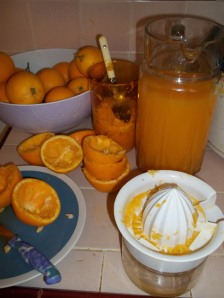 After letting the mixture set overnight and simmer briefly, you let it strain through a jelly bag.

This is probably a great time to mention my jelly-making supplies. When I first started making my own jams, jellies, marmalades, preserves and whatnot, I didn’t have a canning kit, a jar-boiling rack, or really anything aside from a really good Swedish-made plastic oven mitt that can reach into boiling water and grab a jar. Over the last few months I have acquired a funnel that is Mason-jar sized (excellent for avoiding spills — you haven’t lived until you’ve splattered boiling fruit on yourself) and a jelly bag strainer set, with cloth bags and this contraption, that is supposedly supposed to fit on the sides of a bowl, but it doesn’t fit any bowl I own. I had to make do.

I also have a cheap, hand-twisty juicer that I bought at a drug store, but if you are going to do what I did, I recommend getting a nice automatic juicer. The dozens of oranges took forver to juice!

Back to the pectin. One cup of pectin, one cup of juice, a cup and a half of sugar. It says to skim the foam off the top as it’s boiling, but it didn’t provide details. Especially when the pot looks like this:

Eventually the mixture reached a gel point, which is usually when the jam is quickly ladled into hot, sterile jars and sealed — usually it’s already gelling or looks like it’s about to gel immediately. Well, not this stuff. Hours of slicing, juicing, scraping, setting, boiling, stirring, skimming and watching led to two jars — well, not quite. And I won’t know if it will really gel for the next two days. What a buzzkill.

Will update in two days with the results. Instead of being totally bitter about it (get it?), I am going to wait and see how good this jelly is (This had better be the best jelly ever!) and if it’s not awesome, I am going to try a little experiment and use the oranges the same way I used the lemons and limes for jelly previously. More to come …