This Saturday I enjoyed an afternoon of Latin food and music from all over southern California, including tons of delicious wines and sangrias, and more than one type of tequila (hiccup). I got a little sunburned, but it’s a small price to pay to enjoy all the bites and drinks I want for three hours, while partying at the Embarcadero Marina Park.

It was a beautiful day, and the sangria was flowing like … wine.

Most of the vendors were drink companies, so the few that were food had pretty long lines. Luckily they were all delicious, so who can complain? I really loved the bacon-wrapped hot dog con todo (with everything)…

There were many other fine offerings, like this fancy short rib appetizer: 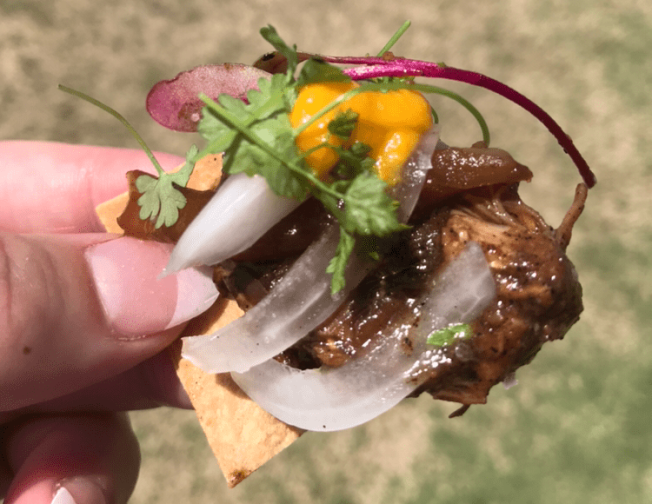 … potatoes with three “Mojo sauces” from Driana (Chef Adriana from the Food Network):

…this amazing beef tartare from Born and Raised … 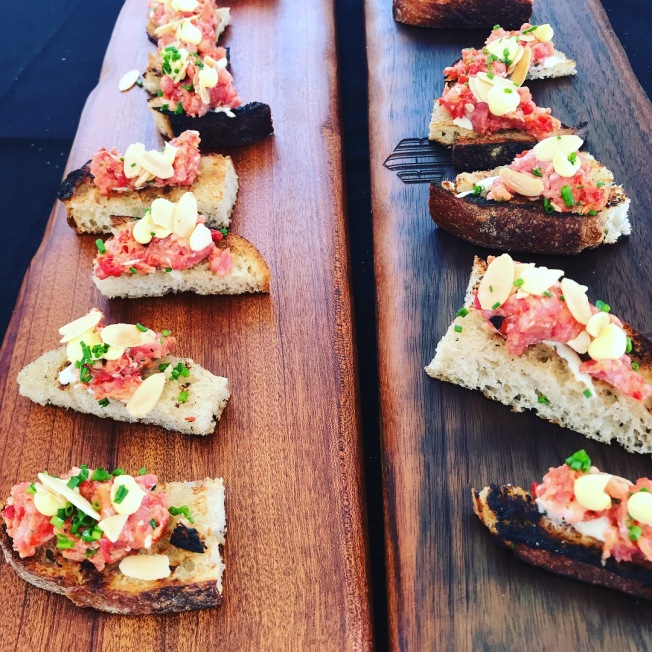 and even this simple classic from Northgate Market: the humble carnitas street taco.

and the Peruvian steak:

The annual event is about $27-40 per person (depending on when you buy tickets) without VIP. The general admission lasts from noon-3 p.m., which is plenty of time to sample everything at least once.

I’ll definitely be back next year!

I’ve always been a huge fan of carrot cake. It’s by far my favorite non-chocolate dessert. So when I stumbled upon a recipe for Carrot Cake Jam, I knew it must be love. And it was. It was all the best things about cooking. It was fun and simple to make, it was very pleasing to the eyes … 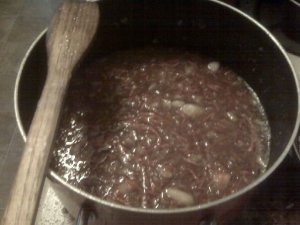 However, strangely (to me anyway), the recipe left out raisins. The second time I made this, I added raisins, as well as a little extra nutmeg and cinnamon.  If you eat it, slightly warmed — not heated, but just to take the chill off, on a bagel with cream cheese, it’s like a recreation of the carrot cake itself. Mmmm….

My family is Scottish and as such I feel it is somehow in my blood to enjoy and be good at making and cooking with marmalade. But after sampling a few different marmalades and making my own (courtesy of the Barefoot Contessa here) I discovered the unthinkable. I really don’t care for traditional marmalade. It’s too bitter and you can’t make a peanut butter sandwich with it. It’s lovely, and it’s easy to make, but I had my doubts.

I tried another batch, this time instead of navel oranges using fresh and local mandarin oranges (although they were very seedy and required lots of seed removal), as well as a large can of crushed pineapple. While still generally unusable for a sandwich, it works on toast, and is also insanely good as a base for a meat marinade. Here’s a nice steak marinated in a vinagrette with the orange/pineapple marmalade on the grill. The smell is fabulous. 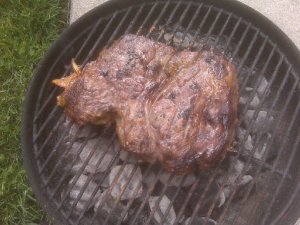 The lamb was tender and perfect … but I can’t take the credit. It was all Paula Deen’s recipe. However, it went fabulously with a jar of homemade mint jelly. This is a super-easy jelly recipe, basically boiling mint and sugar together with a few drops of green food coloring and pectin. The fresh mint in the marinade and the sweet juiciness of the lamb are heavenly …

One of the perils of a good jam, jelly or preserve is that you really can’t taste it without burning your face. By the time you can sample and possibly make any change to the taste, it’s already cooled and in cute little jars.

Quit being such a p**sy and go for the spice.

Since I have never made (or really eaten, to my knowledge) any kind of pepper jelly, I figured I would follow the easiest recipe (calling for a red bell pepper, a green bell pepper, and 6 jalapenos with the seeds and ribs removed). It looked like it was going to be pretty mild, but I was unprepare for how sweet it was.

Anyway, it makes a lovely jelly, it is awesome spread on a tortilla before the hot carnitas and cotija cheese is added, and it was great mixed with soy sauce as a spring roll dip. I plan to make a spicier version … perhaps more than a couple of versions, I’d like to have a variety in my pantry, from wimpy to pants-on-fire.

I felt triumphant. I had gone from being a jam virgin to making three relatively successful jams that people seemed to enjoy eating and hadn’t lost their eyesight or anything. I had some empty jars left over and was wondering what to attempt next when I came home to check my mail, just to find that Martha Stewart had dedicated a large section of the December 2010 issue of “Everyday Food” magazine.

Martha, why do you mock me? I will make that bacon jam. Show you.

But it’s not jam.

Ok, I’ve had enough of your attitude. Just because it doesn’t have pectin and mounds of sugar? Just because it’s slow-cooked instead of forced to the rolling angry boil?

Well, I am no expert. It might not technically be jam. But people love to eat it and people love to get it as a gift, neatly wrapped in a pretty piece of fabric.

This was by far the most popular jam I made in 2o10 … even though I suppose it’s technically more of a tapenade or dip. Here goes: render a massive amount of bacon – the recipe says  1 1/2 lbs but I doubled it to three and may have (ahem) used a little extra – in a big pot. When it starts to smell like victory, add chopped onions, garlic, chives, and assorted things you like to use.  I added some extra herbs. Then add a cup of strong coffee, maple syrup, cider vinegar and some brown sugar. Put it all in your slow cooker, on high, with the lid off. Your kitchen will smell amazing.

After the mixture starts to thicken and get bubbly and a little darker, it’s ready. I learned after two batches of this awesomeness that although bacon fat is … well, kind of the idea, it is a little bit greasy for some. If you’re giving it as a gift, skim off some of the fat, if for nothing else then because it doesn’t look pretty through the glass jar.

This stuff is delicious on any sandwich. I also tried some with hot sauce and cream cheese as a tasty dip for tortilla chips. It is amazing.

Of course, it wasn’t an accident that the magazines are putting ideas like homemade jams and jellies in our heads around the holidays. From Halloween til New Year’s, people everywhere – like me – are looking for ways to wow their friends and acquaintances with the deliciousness coming forth from your kitchen. Something that can be done on a budget? Even better. Something that can be decorated artfully and delivered personally? Lovely. 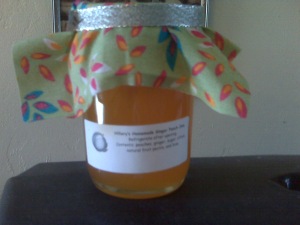