My kitchen looks like my Pinterest boards exploded all over it this week, but I can’t say I’m mad about it, because all of the experiments I tried for my Independence Day party were great successes!

Every year, I have a big Fourth of July party, usually starring a few smoked items using my Masterbuilt M7P smoker. This year, like every year, I smoked a few good meats, including a beer-can chicken, but I wanted a few good desserts, too.

The first was super-simple … a cookie sheet, a bunch of Oreo cookies, some marshmallows, and a jar of cookie butter. (The recipe I took this from called for peanut butter, but Trader Joe’s has this thing that actually tastes like cookies, so I thought that would be better. I was right. You should feel free to use whatever gooey, creamy, buttery spread you have on hand.)

I prepared it before my party started, and when it was dessert time, I just turned on the oven and let them melt and get all gooey. My only mistake was only making one pan full of them.

My next dessert also required a bit of work before the party, but it was worth it. Basically, I made Jell-O shots using a watermelon as the mold … hollow out a watermelon, fill it with Jello-O (oh yeah, with vodka instead of cold water) and then at the party, slice your watermelon into adorable slices.

Just make sure you cut your “watermelon” into small pieces if you’re making them into vodka shots.

For my meat dishes, I had two ideas in mind. I wanted to try to make my own version of a porchetta. In Italy, it’s a small, boneless, suckling pig, stuffed with herbs and roasted over a spit, then served with crusty bread.

Neither my budget nor my outdoor cooking system will accommodate a whole, boneless suckling pig, so I didn’t even bother researching how much that would cost me. Instead I took a trip to my favorite butcher shop, which had super-thick-cut slices of both pork loin and pork belly. 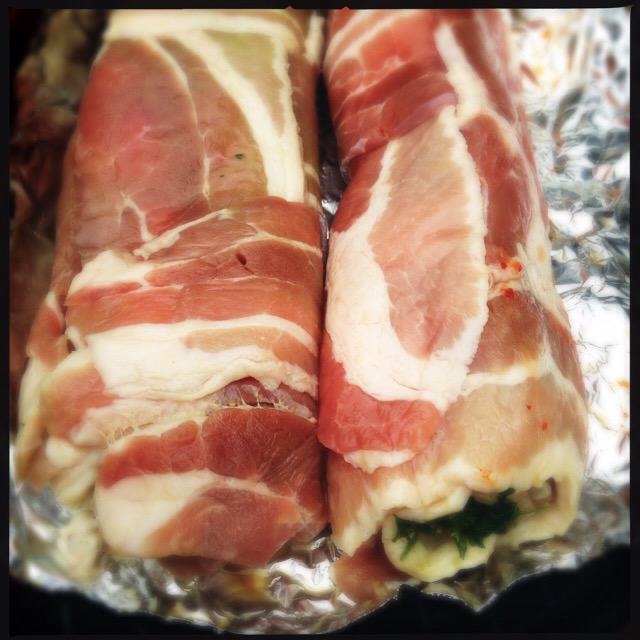 I wove the thick slices together, coated it with a mixture of herbs on the inside, (green onion, parsley, garlic, cilantro, and white wine), then rolled it carefully.

I let them sit in the fridge overnight and smoked them alongside my other meat items.

Then I served the slices of finished smoked porchetta with some nice crusty bread. Again, my only mistake was not making enough.

I definitely will be working on the specifics for this porchetta some more before I post a full recipe. I want to tweak the herb stuffing so it’s not so spicy, and tweak the meat so it holds in more moisture without being wrapped in foil while smoking. This was an excellent experiment, for sure … but it could be better.

Lastly, and surprisingly the most fun, was the SwineApple. I had trouble finding two large pineapples (those smaller, sweeter, Hawaiian ones are in the stores now), so I made four small ones. I also found some amazing spicy bulgogi-spiced pork belly and pork spareribs at the local Korean grocery store, so that’s what I used to stuff and wrap my pineapples.

The most time-consuming hands-on part of the process is properly coring and peeling your pineapples, which is harder than it looks. If you’ve never tried it before, ask your grocer for help or try a You Tube video for some tricks. I found it was easiest to core the pineapples first, then cut the peel off.

And don’t throw away the cores and peels! Save them to make tepache. Trust me.

First, stuff the pineapples with the bits of pork spareribs. Try to keep the pieces small so they cook thoroughly.

Next, wrap them with the bacon or pork belly, and use a toothpick or two to hold the slices in place if necessary. 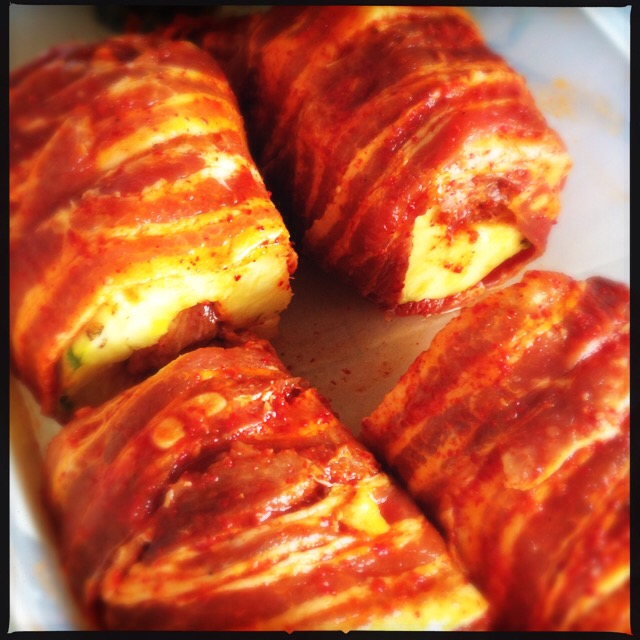 Place them (gently!) on the smoker and smoke for about 3 hours.

As you can see, my smoker was a little crowded on Independence Day.

Although most of the pork belly wrap seemed to sort of melt into the fruit, the spareribs on the inside stay nice and chunky. 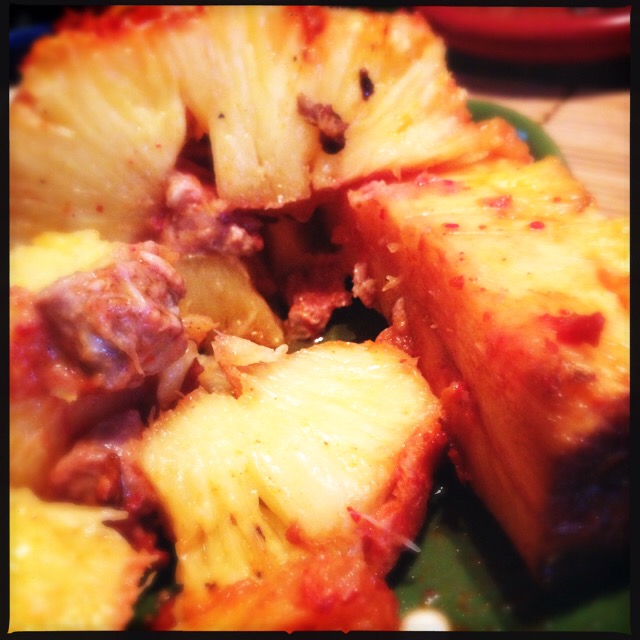 Then, all you have to do is slice it up and serve it with some toothpicks.

One thought on “New summer experiments, smoked porchetta and SwineApple”