Ok, so this recipe wasn’t entirely a success. I had been looking at recipes all day, and lots of people on the October Unprocessed 2013 Facebook page (check it out if you haven’t yet) were posting photos of cauliflower crust pizzas that looked really good.

But first, I had to pick up my CSA box from the farmer’s market. Look at all of these goodies … it practically screams “fall,” doesn’t it? That’s a big bunch of kale, green beans, melon, summer squash, sunflower greens sprouts, tomatoes and red kuri squash. 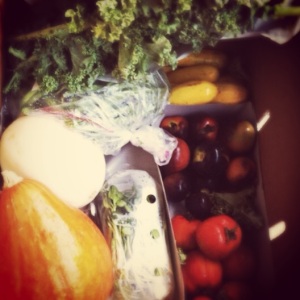 (Not pictured: two sweet potatoes and my  mind, spinning with recipes.)

I had a banana and some granola for breakfast, and baby carrots and hummus for lunch. I was gearing up to make a big supper. My plan was for a cauliflower-crust pizza, but my crust didn’t get crispy enough, so it was more like a big, spicy Autumn casserole. It was pureed cauliflower mixed with an egg and a bit of oil (spread it in a pan and bake it by itself until its crispy — I just jumped the gun and added all of the toppings before it was time).

I used homemade chimichurri as a sauce, and roasted some sliced sweet potato, Brussels sprouts and mushrooms. I also added sliced fresh tomatoes from my CSA box, plus homemade mozzarella cheese. Again, it wasn’t like a pizza, but it was darn tasty.